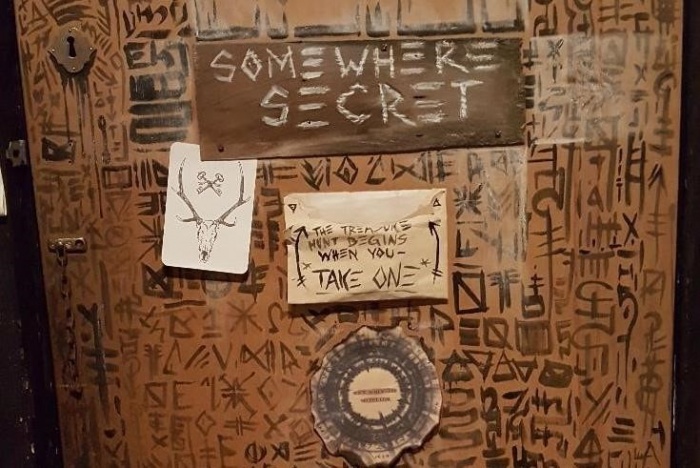 The Lightsource Creative Communications team took part in a week of office teambuilding activities to take advantage of Colleen’s visit to Fort Collins. On a Tuesday afternoon, the team went down the street to try out the Somewhere Secret Escape Room. The room itself is nestled on the second floor of the Walnut Creek building, above the store. Constructed with plenty of whimsical and mysterious charm, the puzzle room is also an immersive storytelling experience as well as a challenge. Participants are drawn into a world of riddles, cryptograms, gadgets, and mysteries.

A group of 2-8 people is ideal, since there are plenty of puzzles to solve and it helps to have a team. The experience is a fantastic teambuilding opportunity and incredibly fun for everyone. The location, atmosphere, and gameplay excite the imagination. Somewhere Secret’s creators crafted an unforgettable environment that can make players feel like characters in their own adventure story.

Below is one such story, which provides a slightly fictionalized account of the Lightsource team’s experience with Somewhere Secret. We hope it will entertain you and inspire you to seek out similar escape room challenges with your teams as you embark on your own episodes of intrigue.

On the surface, the Walnut Creek Artisanal Mercantile seems like any other antique store. With its handmade wares and shelves bedecked with Americana from the last two centuries, it fits in perfectly among the shops of Old Town Fort Collins. Nostalgia coats everything like a fine layer of dust, waiting for someone to disturb it as they pick through the artifacts. However, beneath the veil of its quaint, small town atmosphere, there lies something more.

“Are you really sure we should be here?” Carli asked.

“Except for the symbols on the stairs…” Carli said.

Underfoot, the wood groaned with every cautious step we took. Sunlight found its way inside through a milky window near the top of the stairs. From the moment we reached the top, we realized the upper level wasn’t supposed to be a shopping floor. If anything, it seemed to be storage area for the shop below us, almost like their oversized attic. Still, the dusty boxes, pooled shadows, and faint lamp glow beckoned us to explore.

“There’s the freight elevator,” I said, pointing to the right. The green, wooden hoistway of the building’s original hand-pulled elevator jutted up through the floor. It was the discovery of the old mechanism down in the shop that spurred my curiosity to reach the second floor. Boxes blocked the loading bay, but the scene to our left quickly gave us more to investigate instead.

Creaky floorboards betrayed the building’s age, and felt deafening in the gentle stillness. The murmur of customers below grew fainter the further we crept from the stairwell. Ahead of us, the path narrowed as we passed what we assumed was a mere office. Upon closer inspection however, we discovered the room was something far less mundane.

Arcane symbols and glyphs covered every inch of a wooden door. Some seemed to have been scrawled out with charcoal, while others were written in a black ink. A few scraps of parchment were nailed to the surface as well, but their script was printed in English, thankfully. Of the hundreds of characters and hieroglyphs, the only four either of us recognized were the triangular, ancient Greek symbols for earth, air, water, and fire. 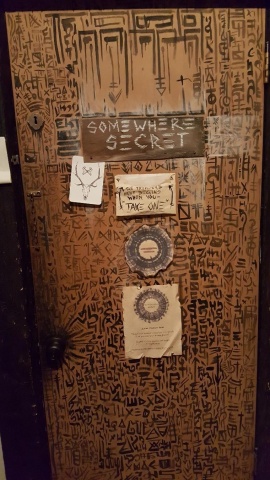 “Okay, this is getting too weird,” Carli said. Not far from the door, there was a large space with dozens of chairs arranged in rows. All the chairs faced a freestanding doorframe and a single, unmade bed. “I think it’s time to go.” 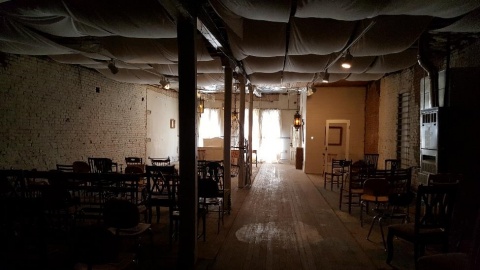 I felt a chill despite the stifling air when I looked at the scene. A creeping sensation attempted to overtake my desire to explore; the feeling that we were dealing with something we didn’t understand.

“One sec,” I replied. “There’s something here.” Tacked beneath a sign etched with white chalk was a wrinkled envelope with a message.

“The treasure hunt begins when you take one,” the message said. I peeked. Dozens of paper strips were inside, all bearing a single clue.

“I think we’ve found something better than weird,” I said as I showed the paper to Carli before slipping it into my pocket. Indeed, we had discovered something special, although we didn’t realize it at the time. We found somewhere different, somewhere extraordinary, Somewhere Secret.

Nearly a year later, I found myself in front of the mysterious door again. Months of research revealed more leads, and made it clear that the room wouldn’t reveal its secrets without the aid of others. Fortunately, I was a part of the Lightsource Creative Communications team, the finest group for the job. 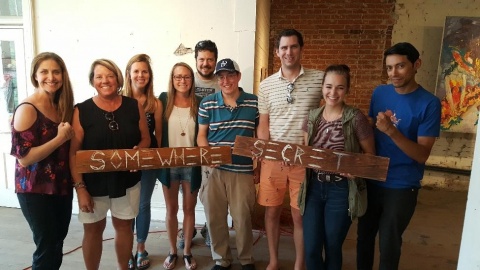 Lisa, Colleen, Jamie, Kaitlin, Kenna, Dave, Drew, Diego, and I gathered at Walnut Creek in the evening and waited for our contact. A woman emerged from the offset staircase with an antique lantern in her hand and introduced herself as Cori. She led us up the creaky steps and sat us down on a bench across from the locked room. There, she explained the situation to the team.

Fort Collins was over a century and a half old, with a history rich with the stories of pioneers, explorers, and settlers. However, at the twilight of of the 19th century, the city was also home to an inventor unlike any the world had seen before. He was a man versed in metals and minerals, codes and cyphers, science and secrecy, logic and magic. He was the Alchemist, and this was his study.

Millenia ago, philosophers, scholars, and inventors worked in protoscientific laboratories in pursuit of extraordinary goals. Universal panaceas, elixirs of life, and unlimited knowledge of the universe itself were among their aims. The Alchemist of Fort Collins however, discovered something more material, albeit no less wonderful. In his final note, he revealed that he learned how to elevate any ordinary metal into precious gold, tapping the fountain of wealth.

The Alchemist also warned that his discovery came with sacrifices, and thieves were out to steal his secrets. He seemed to know his demise was imminent, so he devised a series of trials, puzzles, and riddles to test anyone seeking to inherit his treasure. To further complicate matters, Cori said a band of unsavory characters had approached her not long before she met us. She threw them off the trail for now, but eventually they’d realize the trick. We had maybe an hour before they returned, if we were lucky.

Since we were less than eager to cross paths with the other treasure hunters, we listened intently to the rest of Cori’s instructions. The room before us held dozens of ingenious contraptions, riddles, and challenges. Only the worthy could find success. To crack the Alchemist’s codes and unlock the final clue we needed to use our wits, teamwork, and a touch of magic.

Cori examined the group, searching for a member of the team with latent powers that could prove useful in the room. After a moment, she determined that Colleen and Diego had the power, and she marked the tops of their hands with a piece of charcoal. When the time came, this clue and their power would steer us towards success. Cori unlocked the Alchemist’s study and we stepped into the room of mysteries.

Entering the study was like stepping back in time. Antique wallpaper clung to the wooden interior walls while several unique lamps filled the space with an amber glow. At first, the scene was overwhelming and everyone struggled to drink in the wonder that hung in the air. Desks, lockers, suitcases, and more were spread around the room and made it impossible for one person to investigate everything at once.

The nine members of our team split up and examined different areas with a partner or two. Padlocks secured by combinations or keys blocked our progress, but we quickly tore into every scattered clue we found. Together, we deciphered cryptic messages and tackled the codes needed to unlock one mystery at a time. However, as soon as anyone made a discovery, they shared it with everyone. One new artifact or strange relic was often important to someone else’s puzzle.

At first, the Alchemist’s enigmas proved so tricky that each small victory was like chipping away at a brick wall. Fortunately, as the team shared keys, items, and codes we became faster and faster. Soon enough we weren’t just chipping at the wall with chisels, we found the sledgehammer and the obstacles fell like dominos.

Minutes dripped away, sand in an hourglass within a place that was itself displaced from time. Still, joy radiated from our faces whenever we solved a puzzle and found another clue. Certain tests left us vexed for several minutes, but they soon fell to our combined skills, a little luck, and even Colleen and Diego’s magic. The moment they realized the power in their hands was one they’ll remember for a long time indeed.

The trials tested our abilities to think abstractly, communicate effectively, and solve problems creatively. We were amazed at the Alchemist’s ingenuity, and equally pleased with ourselves as we pieced our way closer to opening the triple locks on the final chest. Two of the locks fell free in no time, but our window of opportunity narrowed with every passing second. At last, everyone assembled to review the major clues and objects we had found. When they were all put together, the riddle unraveled and we dialed in the last combination.

We lifted the treasure chest’s heavy lid. The hinges creaked and golden light spilled out. A rolled paper page tied with string rested on a glowing shelf. Victory was ours. Congratulations and cheers went around the room as the team removed the paper and unrolled it. To our surprise, it wasn’t the formula for elevating any metal into gold. It was another clue; the final clue to where the secret was ultimately hidden.

“You did it,” Cori said, entering the study. “The treasure is out there, and now you have the clue needed to find it. The next part of your quest begins now, but you must hurry! The other treasure hunters could be here any minute.”

We thanked Cori for her assistance, hid our prize, and made our escape from the building without a hitch. With a clean getaway and the thrill of the adventure filling our hearts, we couldn’t have been happier. Teamwork and creativity had won the day, and we left the Alchemist’s room of puzzles with our prize. While the ultimate treasure is still hidden somewhere, our team is up to the challenge after exploring the secret study. If there are three things we learned inside that magical place, they are to think differently, never give up, and never stop searching. 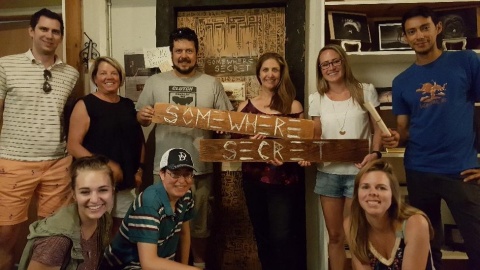 What will you discover? 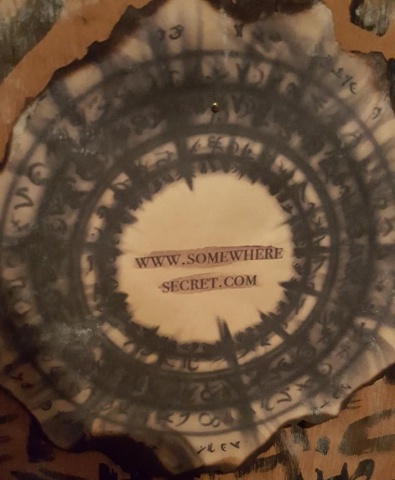