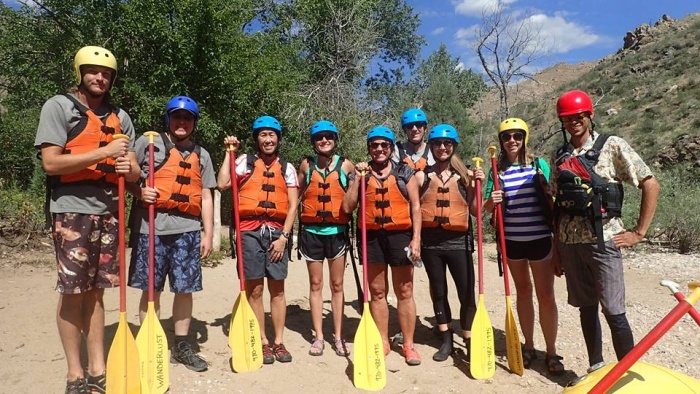 Everyone knew it was the perfect day for rafting, even those who’d never been before. The mid-morning sun beamed in the unblemished sky, quickly warming anyone caught in its rays. As 9:15 rolled around, more rafters showed up and filled the outdoor waiting area near the shady table our team had claimed. We shared weekend stories, applied sunscreen, and filled out liability waivers until at last, check-in time arrived.

Diego distributed life jackets and helped us fasten them correctly. He made sure to explain the importance of the tight fits, since loose jackets can cause more harm than good should someone fall into the river. After selecting helmets and watching the river safety videos, our group boarded a bus with the others for the trip through the canyon.

With the bus windows down, the canyon air felt cool as we rushed to the put-in. Thanks to a few volunteers, the guides had the rafts in the Poudre River in no time. Lisa, Colleen, Rose, Jamie, and Kaitlin went with Diego as their guide, while Gordon, Jack, and I went with two unrelated customers and a guide named Brian. The guides explained the paddling commands they would use, and demonstrated how to paddle properly before everyone launched. The crew of our raft performed a few practice maneuvers and drifted down the calm opening waters. Fortunately (or unfortunately, depending on who you ask), the river didn’t remain calm for long. 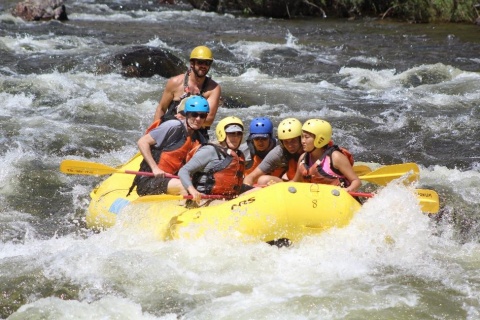 The first major splash firmly hit the left side of the boat. Under less-than-ideal conditions, the chilly water would have been enough to numb limbs and make us miserable. Of course, under the unflinching sunlight, every wave was downright refreshing, and the rapids’ mist and sprays cooled the crew. Still, the water temperature was one of many incentives not to fall into the river, a feat the guide of another boat quickly failed at. As we passed by, the dripping guide awkwardly and sheepishly scrambled back into his raft. His fellow guides were quick to remind him who was now buying the beers tonight. 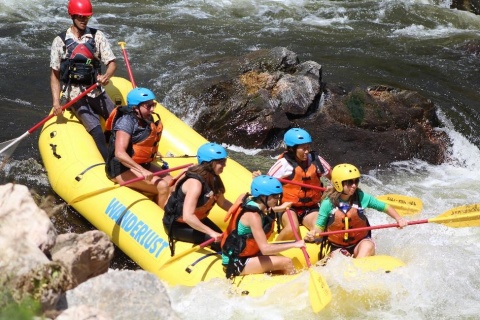 At first, I thought it was just a fluke that the guide fell in so early in the trip just for being careless. However, as we floated towards the higher-class rapids, we discovered that anyone can get an impromptu swimming session in the Poudre. Diego’s raft hit the rapid known as Rabbit Tunnel and the crew battled to dodge waves, holes, and rocks. They succeeded for the most part until suddenly, and for an instant, Colleen and Lisa were nowhere to be found. One sharp jolt was more than enough to send the ladies into the river faster than a blink.

Two blinks and one frantic gasp later, Lisa bobbed to the surface and immediately searched for her swimming partner. To her displeasure, Colleen was still missing since she was preoccupied with traveling under the raft and finding sharp rocks with her shins. Having quickly gotten their fill of swimming for the day, Colleen and Lisa were eager to return to the safety of the boat. This was easier screamed than done because unlike amusement park attractions, this was one ride that couldn’t be stopped.

Diego attempted to save Lisa, but Murphy’s Law took effect and her vest buckle got stuck on a raft handle. His efforts to free her nearly rewarded him with a splashdown of his own. Lisa clutched at the raft, struggling to find a solid handhold. The rubber hull was too slick, unfortunately, but she kept trying until Diego finally pulled her back in. With Lisa safe, it was time to save Colleen. Of course, the river wasn’t going to make her rescue simple either.

Rose grabbed Colleen’s vest straps and tried falling backwards to pull her in like we were taught. It was no use; the rapids were too chaotic and Colleen stayed put. Everyone else in the raft wanted to know how they could help. With no one on the riverbanks to throw a rescue line, they were on their own. Fortunately, Diego, Jamie, and Kaitlin were able to navigate the craft to calmer waters while Rose held onto Colleen. After several harrowing moments as a solo river explorer, Colleen was brought safely back onboard by Diego. As quickly as the ordeal began, it was finally over. The grateful crew took a brief pause to catch their breath. More rapids approached and there wasn’t time to do anything but grab a paddle and brave the river’s best. Besides, ending the trip now meant missing all the action yet to come. 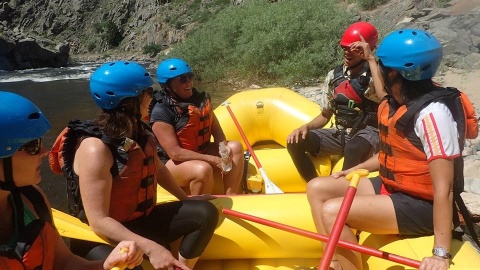 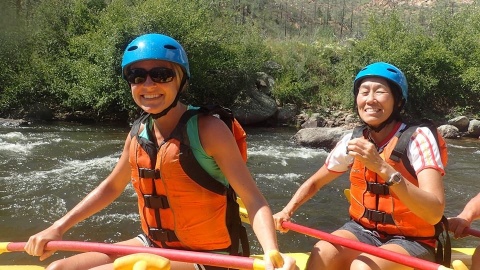 We should have known that a rapid named Sonic Boom or The Maw would be trouble. Well, we would have known that if Brian had told us before, rather than after we ran it. Maybe if we’d known what to expect, the passage would have been uneventful. As it transpired, we paddled hard to punch through the rapids, but the rapids and a boulder on river left were determined to introduce us to the Poudre.

Everything happened in an instant. We sped towards the boulder, but the rapids brought us back to the right in time to miss most of it. However, the smallest bump to our bow was enough to shunt us sideways. We fell sharply and Jack came loose upon impact. Unable to keep his center of gravity low after our rapid descent, Jack was catapulted into the air. Unfortunately, Gordon was in Jack’s flightpath, and he wasn’t in any position to ground the new naval aviator as he took off. The two collided, sending Gordon underwater a split-second before Jack followed.

I took a deep breath and braced my paddle against the raft, determined not to join Gordon and Jack on the Poudre Canyon Swim Team. The remaining raft passengers held on and scanned the river for them and listened for Brian’s instructions. Luckily, the Wanderlust bus driver was waiting on the riverbank near The Maw with a throw bag. The rescue line went out and Gordon and Jack made their way to the rocks without a problem. Although Gordon’s paddle was carried away by the current, Jack managed to hold onto his throughout the dunking.  Brian guided us into a calm spot on the edge and stopped the raft to collect our waterlogged crewmembers. Back up two rafters and down one paddle, we headed off to rendezvous with the other crews. 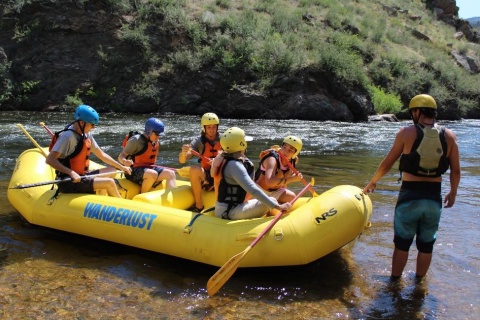 Damp, but undeterred, we floated on. Our crew was more cautious, but still acted quickly to carry out Brian’s commands. We navigated the river’s various obstacles and challenges well, and enjoyed the scenic journey from rapid to rapid. Bighorn sheep watched us from the ridgetops, while their curious lambs ventured closer to the riverbanks where we easily spotted them. A great blue heron perched itself on a high tree branch, unfolding its massive wings to dry in the sun. Fly fishers waded into the water, and waved when we passed. Families of campers did the same as their noon campfires and grills cooked their lunches to perfection. Unable to stop, and with nothing to trade, everyone could only dream of the juicy burgers and hot dogs, and the cold beer to go with them. 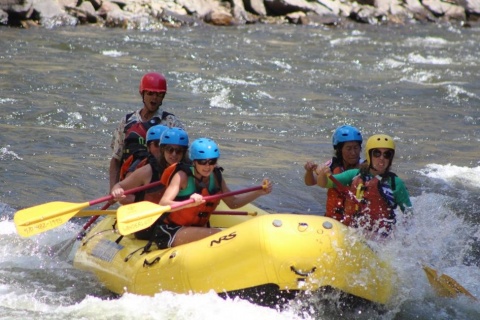 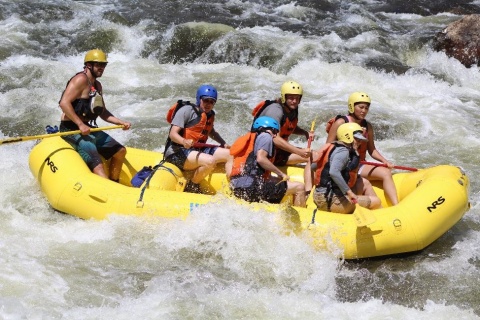 Not long after noon, we reached the take-out point and paddled our rafts onto the bank. Guides and rafters hauled the boats up to the bus trailer despite everyone’s sore and wobbly legs. After ensuring all participants and equipment were accounted for, the Lightsource crew and the other group filed into the bus back to the Wanderlust office. There, we returned our life jackets and helmets before gathering around the TV screens to watch highlights from the adventure.

After a morning of thrills, chills, and a few spills, it felt good to be on dry land again. For the rafting novices, our trip was one more item checked off their bucket lists. For the rafting veterans, it was another fun and successful run. Everyone agreed that the teamwork demanded by the river was something all offices should experience at least once. Personally, I think once is good, but why stop there? After all, no two days on the river are the same, and more Wanderlust Adventures await.